The Mystery of the Missing Page

A little while ago I noticed something very strange over at Wikisposure: the page with the screenshot of Jeremy Bolick's sex offender registry page has disappeared. It is still linked to through the pages of others which provides the lingering evidence that is used to be there but the page itself is no more.

Here is what now shows on the page dedicated to Jeremy: 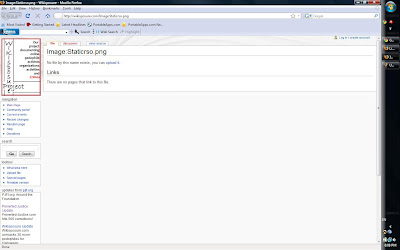 And here is a page with one of the remaining links: 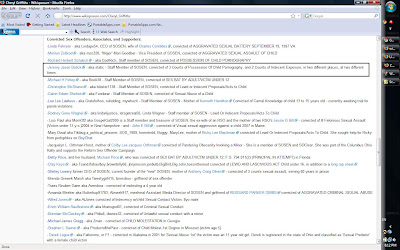 And this is the image that used to be shown on the page:

I've held off on posting about it until now as I wanted to verify whether this is a definite cover up by the Wikisposure staff or if it was simply an error that will be rectified. I sent an email to them several days ago but, as they've not replied, I felt it was time to post the article. Naturally, in the interests of full and open communication, should they pluck up the courage to reply I'll provide an update.

Interestingly enough, before I'd even posted this article, Stitches77 waded into the discussion with her own warped brand of logic.

Obviously, the reason I raised the issue in the first place is because it would appear a blatant case of double standards by the people who run Wikisposure. Even though Jeremy is a repeat child sex offender who committed his offenses over an extended period of time, now that he's a mate of theirs, they're happy to remove online warnings about him. But Stitches77's comment is even more interesting as she spends so much time trying to perpetuate the myth that anyone with a paedophilic or hebephilic sexual orientation is a clear and present danger to children, regardless of whether they've ever offended or not. And yet here she is implying that someone we know to be an ongoing risk is no longer dangerous.

Make up your mind sweetie: either, as you repeatedly claim, all sex offenders (including your 'special' friend Mr Bollocks) are always dangerous people or they're not. You're contradicting yourself yet again by trying to make special exemptions for your own paedo-buddies. Seriously, as the great man once sang; "You're an idiot babe, it's a wonder that you still know how to breathe".


Related article: Absolute Zero Unites Blog
Posted by Voice of Reason at 8:10 AM

Static's starting to go off the deep end. Here's a little veiled threat he made to me last night, which I rejected:

"But make sure you're ready to pay the price for the things you say."

"You can't just go around making false accusations about me without being held accountable. Fair warning.."

How does it feel, Jeremy? Its okay for AZU to make accusations and call me all sorts of crap and claim I'm something I'm not, but ~OMG!~ I just had the audacity to speculate on an AZU member's intentions for joining the group! ~gasp~

Thanks for the laughs, Static.

I'd be far more likely to have sympathy for him if he hadn't been so vocal in making false accusations about me. At least you're just speculating about his possible intentions rather than doing like him and his cronies and publishing outright lies. Besides, it's not like he can deny his history of getting off on child pornography.

Well, this is the problem Marina has. She has such double standards that she is incapable of consistency in her statements. She just hopes that by abusing anyone who points out her inconsistencies she'll be able to silence those who hold her to account

The cunt doth protest too much, methinks.

I see Static doesn't like AZU logic applied to him. He's STILL fuming over it. There's an old saying about if someone protests an accusation too much, it is because they are guilty of it.

I'll elaborate further. AZU reads pro-pedophile propaganda. At least, that's what they claim, and I for one will not go to these sites to verify whether these sites are truly pro-pedo or if AZU is just making this stuff up, like they tend to do with everything else. And Jeremy, who has more than one conviction for sex offenses, is there and gets to partake in AZU's shenanigans. And he even warned on a defunct forum about how AZU puts up material that might "trigger a relapse." Now he gleefully participates in AZU's smutfest. AZU gladly posts graphic descriptions of adult-child sex in many places on the forum under the guise of "educating the public about dangerous pedophiles on the web."

It is hard NOT to play connect the dots and see whe logical conclusion one would make. Maybe Metanoid didn't take that into account before giving Jeremy his seal of approval.