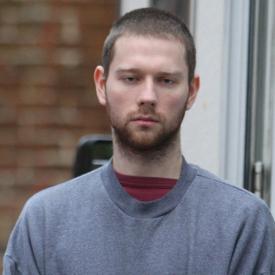 This is Christopher Hunnisett. He is a vigilante. In other words he's a violent coward. He served 9 years for the brutal murder of a priest he claimed abused him although there's no evidence supporting his allegations. It could be suggested that a smart lawyer would use the cliche of a child molesting priest to try and get his client off. We'll never know as Mr Hunnisett clearly doesn't believe in justice. He's since been acquitted of the murder although questions remain.

He has now admitted murdering an innocent 57 year old man. Demonstrating the strength of his bloodlust, this time he tortured the man before beating his head in with a hammer. Again he's claiming to have murdered the man as he was a 'paedophile'. The police have investigated the victim and yet again found no evidence to support Hunnisett's allegations.

People like Violent Leaves support animals like Hunnisett. Many times she has publicly stated her advocacy of the rape and murder of sexual minorities. She also targets these minorities with taunts and encouragement to kill themselves. I stand in opposition to people such as her and Hunnisett. I believe in the rule of law. I believe in innocent until proved guilty. I believe in civilised society. I can only hope that justice is done in this case and Mr Hunnisett is gaoled for a long time.
Posted by Voice of Reason at 7:47 AM 1 comment: