Voice Of Reason - A New Direction

As anyone who's read this blog for a while would know, I started it with the naive premise that all sides of the debate would relish a neutral ground in which to post comments, ideas and opinions without one side or the other censoring them or, worse still, editing them to create a false impression of what was actually said. Sadly, I've discovered that a certain group of individuals don't want to be involved in an even handed debate or discussion but are only prepared to comment on their own small blog in order to control, edit and manipulate comments.

For this reason, my blog hasn't succeeded in its original goals and has gradually changed direction from being a forum for rational debate to being more of a commentary of the misrepresetations and illogical fallacies of a group of misguided individuals. I've therefore decided to recognise this change of direction and formalise it.

The new direction of this blog is to comment on the issues and expose falsehoods and illogical prejudices wherever they may occur. Of course, I still welcome comments and thoughts from anyone who wishes to contribute and hope that at some stage both sides of the debate will become mature and confident enough to contribute to a forum over which they're not able to have control and manipulate the comments of those with whom they disagree.
Posted by Voice of Reason at 3:24 AM 5 comments:

Yep, the 250 day mark of the Jeremy Bolick challenge has passed and we're still no closer to a resolution.

For those not in the know, Jeremy is a man who has been convicted of multiple child sex offenses and possession of child pornography. Ironically, given his history, he is also someone who labelled me as a paedosexual. I challenged him to provide proof of this and, to date, his best attempt has been nothing short of pathetic.

As I commented at the time of his response to my challenge, picking a random Australian (my nationality) from the GirlChat archives and attributing his comments to me really doesn't cut the mustard. Seriously, I'd have expected Jeremy to have at least made up an IP address and then claimed that both my posts on this blog and the GirlChat posts came from the same computer. He hasn't even done this. He's just posted the GirlChat Aussie's posts and claimed they were written by me: no evidence and no proof are apparently perfectly acceptable in Jeremy's world. As a side note; given the comments of support from his cronies at AZU, apparently they don't place any importance on evidence or proof either.

Come on Jeremy, we both know what's really got you hot and bothered. You're trying to ingratiate yourself with the AZU fundamentalists whilst having a dirty, perverted past. It frustrates and angers you no end that you're a convicted child sex offender and I'm not so you want to do anything possible to drag me down to your level. Well, it won't work. The reason you've resorted to baseless non-proof tactics is you know your original claim is a lie.

Sorry Jeremy... yet again your best attempts turn out to be epic fails.
Posted by Voice of Reason at 6:25 AM 1 comment: 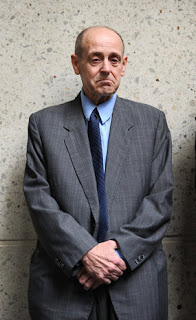 For those not in the know, Dennis Ferguson is a man who was convicted of child molestation in the late 1980s. Since his conviction, he has steadfastly maintained his innocence. This refusal to admit to a crime he claims not to have committed led to his exclusion from sex offender treatment programmes in prison and thus also excluded him from the possibility of early parole. He served his full 14 year sentence and was eventually released from prison to an awaiting media frenzy. Since his release he's been hounded from house to house as successive communities have been whipped into a frenzy.

None of us will ever know for sure if he really did commit that vile crime or if he was indeed wrongly convicted as he claims. He's been exposed to massive media coverage yet few of us really know much about him besides the one dimensional caricature the media present. For this reason it was interesting to watch the progamme devoted to him on Four Corners tonight. He doesn't present well but that's largely to do with his physical characteristics and the facial expressions that come with his blindness.

My gut feeling is that he is indeed guilty of molesting those poor kids and deserved the sentence he received. Still, he's now paid his debt and should be able to get on with his life without being constantly hounded and harassed by the unwashed masses - in particular the media whore Sean Killgallon who he's been driven to apply for an Apprehended Violence Order against. Check out the interview and story and make up your own mind.

LINK TO FOUR CORNERS SITE
Posted by Voice of Reason at 5:34 AM No comments: