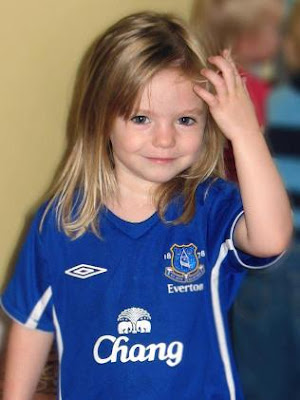 LINK TO NEWS STORY
History is full of instances of mass hysteria. Probably the most well know are the witch panics which cost the lives of many innocent men and women. Most recently was when I was a child and the media was full of stories of satanic ritual child abuse. It seemed that every city had been infiltrated by organised satanic groups which were protected by shadowy figures who held positions of power in the community. These groups engaged in nefarious behaviour involving the ritual sexual abuse of children and even used the services of women who'd bear children for the specific purpose of sacrificing them. Of course it became clear in time that the mountains of testimonial evidence were nothing more than delusional fantasies and false memories implanted by dodgy shrinks.
Today there's another mass panic and the reason I've linked to the latest news on Maddie McCann is because it's referenced there. It's the myth of the existence of a vast underworld of organised child snatching rings which take unsuspecting children for the purposes of using them as sex slaves. These reports have all the hallmarks of the satanic ritual child abuse manias of the 80s. They claim that these rings have tentacles that stretch internationally and reach into the upper echelons of society. They claim that these rings are protected by shadowy influential figures. It wasn't long ago that unproven allegations were being made in Belgium that the horrific abduction, abuse and murder of a number of young girls was part of this massive network and that it involved high ranking politicians, judges and police. Of course no evidence supporting these allegations have ever been made public.
Now, obviously I'm not saying that no kids are ever abducted by child molesters for the purpose of sexual gratification. Clearly this does happen although it's a known fact that most child sexual abuse is perpetrated by someone known to the child rather than a weirdo in a white van. I'm also not saying that groups of child molesters don't link up to exchange kiddie porn because that's been proven to happen. What I am saying is that this myth of the all pervasive underworld of roaming gangs of child molesters kidnapping children and passing them from one to another has never been shown to have any basis in reality. Clearly the idea of the existence of such a group sells papers and gets people to tune into tabloid TV programmes but hopefully intelligent people will see it for what it is: a media invention.
Angolan-born Italiano said the gang of influential and dangerous perverts had hunted children in the Algarve before smuggling them out of Portugal,The Sun reports.
Nah.. I don't think so!
Posted by Voice of Reason at 5:42 AM 1 comment: