Thanks to Derek Logue for bringing attention to this case. 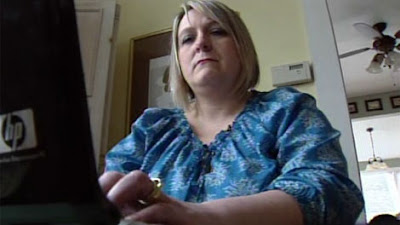 Tragically the daughter of Danielle Schneider (above) was abused by a child molester by the name of Patrick Rojas. He was convicted of the crime, did his time in gaol and has since been released. At this point the former offender would usually try to rebuild his life, receiving counselling and trying to ensure he never does such a despicable thing again.
In this case things took a different turn. Schneider thought she'd be really smart and start blogging about what a horrible person Rojas is. The problem is she didn't limit her blog posts to the facts; nor did she limit it to attacking Rojas. Instead it is alleged she made up lies about Rojas. Even worse, she became a predator herself and attacked people other than Rojas. Often such cowardly online attacks go ignored but for once the person being lied about has fought back. Rojas has launched a lawsuit against Schneider and now she's worried about going broke. The irony is that if Schneider had not herself become a predator and written lies she'd not have anything to worry about but instead she and her family are now in financial trouble and she's resorted to online panhandling.
As a personal comment I'd say that the saddest part of this whole sorry affair is that Schneider has selfishly compounded the scars her daughter will suffer. A truly caring parent in this situation would put her daughter's welfare before anything else. Schneider's not a truly caring parent. Instead she's a vindictive woman whose only concern was exorcising her own rage and guilt regardless of the devastation it was bound to cause to her family. She should be ashamed of herself.
Link to Schneider's blog
Posted by Voice of Reason at 6:09 AM

For the past year she's been begging everyone who sympathizes with her for money. With six kids, I'm sure there is an ulterior motive. I'm sure she was encouraged by the outpouring of support and money for career criminal Tammy Lee Gibson. I knew when Washington state gave that thug a slap on the wrist, it would open the door for more vigilantism and exploitation. Washington state seems to be a cesspool of insanity, especially as it relates to sex offenders.

Your buddies at AZU are finally crawling out from under that rock to make an appearance. You feel like taking a chance to play Whack-a-troll?

Wow.. the comments there are sick even by their standards. It says a lot about them that the only thing to get them active is the impending death of another human being.

Danielle Schneider is simply very mentally ill. Too bad for her daughter. The attention she receives by continuing her vigilante activities against Rojas' family reinforces her addictive attention seeking cravings.

Danielle Schneider is a textbook case of professional victimhood.